So there we have it. Another General Election in the UK done and dusted.

Don’t worry. No party politics here. Just a reflective moment on the authenticity (or lack of it!) of the political process we seem to have in the UK at the moment, after watching with interest the choices our potential leaders made as they tried to persuade us to vote for them.

I don’t know about you, but if I had had the option I may have been tempted to vote for the Dog Manifesto (proposed by the Dogs; Trust)!

I talked last time (blog of 1st May) about the idea of being authentic, and how, when we do what is aligned with who we are, then we don’t waste energy on trying to be something we are not. And last time we focused on the fictional Graham Winston character of Poldark. To quote myself (an interesting thing to do??!!)

…everything he does seems entirely defined by his sense of who he is, and that gives him an authenticity that can’t be manufactured. Who he is and what he does are completely aligned.

It seems to me that our political leaders are so under pressure to do and say the ‘right thing’ all the time, to keep as many of us as happy as possible, to avoid errors and PR disasters, that they have chosen to abandon any opportunity just to be who they really are and say what they really think. The media have even invented a word for it, vanilla, denoting a pleasant blandness and uniformity, a desire not to stand out too much for fear that it will be for the wrong reason. And apparently this desire to do the right thing also means that they are choosing to avoid ‘real’ people in case they ask something requiring a ‘real’ answer. And the impact of these choices on me? That they seem unaligned and inauthentic.

Fuelled by gaffs and upsets in the past, they also employ PR gurus who are quoted as offering such advice as:

With repeated practice, you move from acting to being

But that just isn’t true is it? If I don’t believe what I am saying then will it make any difference how often I say it? Will I suddenly believe it and be it because I have said it a lot?

And in the post election reviews by all and sundry I have heard, a number of times, individuals from parties that didn’t do so well saying things like

But I don’t want leaders, political or otherwise, who create themselves as a reflection of what they think I want. I want leaders who know what they stand for, believe in it, live it and offer me the chance to ‘vote’ for it. I want my leaders to be authentic.

Remember Robert Dilt’s Neurological Levels Triangle from the last blog? If we map Ross Poldark (I know he’s fictitious but he is such a great example) on to it then we get the arrow on the left hand side in the picture below: who he is and what he believes are all aligned with what he does. If we don’t have that alignment then we get the arrow on the right hand side: a ‘glitch’ between who we are/what we believe, and what we do. And managing that glitch takes a lot of energy, (and PR gurus and obfuscation!) 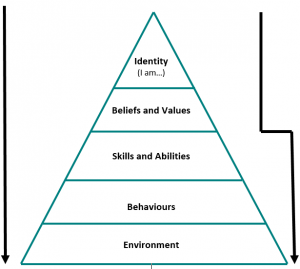 I choose to vote because my foremothers have won me the right to do so. But this time around it felt hollow. In their effort to be all things to all people our politicians have all been very little to me. I’m not expecting anyone to be Ross Poldark, but I would like them to stop being so fearful of upsetting me, to step up, be 1% more honest and just say what they think.

And all of this is true in the rest of life as well of course. When someone is too afraid to step out and just be their best self we can see that. When they are anxious about being 1% more honest, about sharing their opinions and doing what they believe is right, we know. And of course others can see it when that’s the choice we make.

As Stephen Covey puts it:

There is no right or wrong here. Being aligned is a choice. As is saying what we think others want to hear even if its not what we believe. But our choices have consequences and we need to make sure we understand those. And that is true whether we are an individual or a political system.

I wonder if our politicians understand the consequences of their campaign choices? I wonder, if they were 1% more honest with themselves, would they be happy with the ‘themselves’ they delivered to us via their vanilla, managed, risk minimised campaign tactics?

And I wonder, when we aren’t authentic and true to ourselves, whether we might want to explore the other choices that we have, to see what it could be like if we chose to be brave, truthful and aligned?

Where are you being ‘vanilla’? What does that do for you? If you would rather choose to be the real you, what would you like to do about that?

I look forward to sharing more thoughts with you in a couple of weeks.