Influence – the JL Christmas Ad: The Choose You Project

It’s not just the darker nights and the need to wear an extra jumper in the house (our house anyway, even though it’s been a very warm November in the UK!) that let me know that we are heading towards Christmas, it is also of course the arrival of all that advertises the materialistic elements of the festive season. Over the past few days retailers have been launching their TV advertising campaigns, and one that traditionally creates a social media frenzy is the one from John Lewis (picture here from www.huffingtonpost.co.uk).

Millions to make and with the tag line “show someone they’re loved this Christmas” this advert is an engaging 2 minute 10 second story with a great sound track and a warm and fuzzy central message. If you’ve not seen it yet, here it is:

Now of course I am a JL girl. Having worked for them for almost 18 years my enthusiasm has not diminished over the 12 years since I left.  And so I know I am biased, but I do think the ad is fab. And not just for the social media interest it generates or the sales that follow, but for how it does that: because of what it shares with us about how to be influential and get our message heard.

I quite often work with groups or individuals who want to be more influential: with their teams, with their bosses, with customers or shareholders, (and often with their nearest and dearest too!) It can be so frustrating when, despite our best efforts, others just don’t seem to get our message! And often our response blames the listener and we say what we’re saying over and over, perhaps getting a little louder each time, in the hope that they will get it in the end.

But if someone is not getting our message then that is our problem, not theirs. And if they didn’t get it the first time why would they get it the second time just because we said it louder?

One of the metaphors I use around this is the idea of juggling, and I ask ‘what does juggling have to do with being influential?’ Replies include it being hard work, needing to be practiced, that you learn from getting it wrong, that it’s rewarding when it goes well and so on. And all of that is true for sharing a message too.

But what is the most important skill when juggling?

Apparently (I’m no expert but have asked those who are) it’s not the catching, or the speed of your reactions or the hand eye coordination, but the throwing.

When I think about communicating in this way, things change. Whilst blaming you for not getting what I am saying is an option, it doesn’t get me very far. If I am throwing my message to somewhere that you are not, why would you bother to go there and catch it? But if I think about how I am throwing the message and am flexible I can throw it differently, to where you already are, and then maybe you will be able to catch it and my message will be understood.

And that’s what JL have done. They have thrown their message to where we are. Brightly lit and colourful ads full of products and attractive people are great, but the real hook is in the story, because the story gets us at the beliefs, values and identity levels. Then we don’t visit the store just to buy something (actually the JL ad isn’t ‘selling’ anything), but because we feel aligned and want to be a part of the whole thing. It’s back to that Robert Dilts’ triangle that we have come across before: 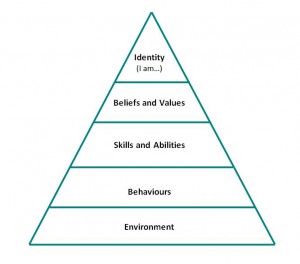 The JL ad works because it speaks to us as people rather than as consumers, and it shares messages at a beliefs, values and identity level (all helped along by some of the profit going to Help the Aged and the whole campaign being designed to increase our awareness around loneliness in the elderly this Christmas). It’s clever stuff, and you can be cynical about that. But me, I’m unashamedly aligned to the values the advert shares. They’ve got me at the top of that triangle.

And when I am influencing that’s what I have to do: not just impress with a one off offer, a behaviour or skill but, if I want to be truly influential, to engage the listener higher up the triangle than that, and have the awareness to know when my message isn’t landing right and the flexibility to not just deliver it again, but to deliver it differently.

Thanks for reading this blog. I love sharing ideas from the Choose You Project and hope you enjoyed it. And thank you too for all the great feedback that you have sent me. It is really good to know that my blogs are being read, appreciated and are found helpful. Do forward this on to anyone you know who may be interested. I’d love to share the message far and wide!